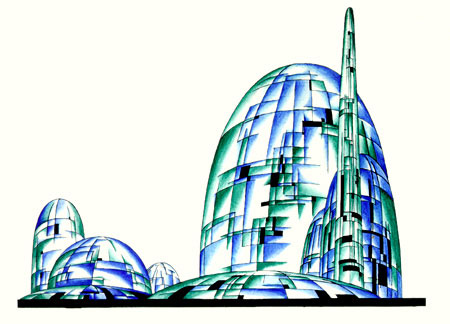 As a teenager, I read science fiction omnivorously. That was the first time my brain structure was messed with. Altered for good. I’m one of those people who would gladly welcome teleport hubs and time tours into the near future. And as soon as I think of teleport hubs I’m bound to wonder for some lazy moments on the outcome teleport hubs would have on urban planning, if not on my weekly schedule. If pressed or challenged to do it, I would even expand those moments on to hours and write with minute detail on how teleport hubs had changed the form of an entire city and had caused massive change on everybody’s lives. I would probably move on to depict an urbanism in which physical movement was restrained to health and entertainment purposes… and the very poor. I wouldn’t care too much to insert a romantic plot or a political thriller onto the picture, but I would most certainly describe the scenario as if I was a visiting journalist, maybe picking a life story or some curious characters along the way.

Now, many people think this sort of wondering exercise is futile. And I would guess most of the skeptics belong to the wonderful and frightening world of academia. Which is paradoxical, because academia is supposedly conceived to prepare human beings for the(ir) future. But nope, most academia around the planet is firmly set in the present, if not, of course, in the time warp of a cherished past. In the bygone, either way.

Concrete exercises in scenario making are now reserved for government intelligence, for some advanced education-cum-research institutions and for smart companies that have to concoct products for teenagers just about to direct their pre-adolescent urges onto material fulfillment.

One would expect the field of architecture to be one in which scenario devising is quintessential. After all, architects do conceive and build solid bits of the near future. But again expectations are deceitful. Most architecture too is firmly set in the quicksand of the present. It responds, as it should, to the needs of today. It integrates, as it can, the technologies that others are preparing so as to pave the way into tomorrow.

I sometimes get the impression that the progressive lack of relevance of architecture culture in the “real world” –despite the increasing mass-diffusion of architecture as lifestyle and star system– may be precisely due to its incapacity to produce effective innovation in aspects that are connected to a fast changing world. Even although this state of affairs might be changing…[ii]

But how does one evaluate the ways in which the world is changing? Some aspects are already palpable, of course. But others are rigorously unpredictable. As Pilkey and Pilkey-Jarvis suggest while speaking of environmental predictions, mathematical models are constantly proven wrong.[iii] So, if we can’t say “in maths we trust,” what can we trust?

Beyond, Short-Stories on the Post-Contemporary[iv], for instance, may have started by tackling “Scenarios & Speculations” in a way that readily evokes science fiction, but still its goal is broader. The ambition of the book series is rather to add stimuli –if not a sort of electric shock therapy– to a field of knowledge that, while constantly exploring unforeseen possibilities, has enormous difficulty in bringing that prescience to a larger audience.

By way of stories commissioned to or submitted by both architects and writers, Beyond recurs to fiction and the speculative imagination to dig out the visions of the post-contemporary that tend to face premature burial in the architectural field’s unconscious. It proposes that fiction’s ability to prompt a deep, appealing reflection –its capacity to trigger the speculative imagination– may be deemed inspiring for the conception, fruition and advancement of architecture.

Since at least as far as the XVIII century utopias, architects, as much as writers and philosophers, have frequently dealt with astonishing future scenarios. And more than describing them, they have even pictured them with brilliant accuracy. Often, however, these findings were sooner led to the discipline’s archive rather than received in the general encyclopedia or Malraux’s imaginary museum. Chernikov’s architectural fantasies became a repertoire from which later architects could feed so as to take the latest formal novelties out of their hats. And Archigram’s walking cities keep coming back in a vicious circle,[v] while still awaiting for the world at large to accommodate the corresponding technological dream. 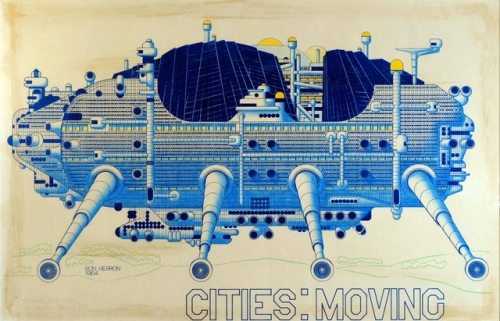 Architects keep producing in-depth research into specific possibilities attaining to the near future, and, more and more, are acknowledging coming social and environmental problems in their mind-blowing architectural concepts. And yet all this production of knowledge seems to be doomed to storage oblivion, as each of these concepts readily goes through its ghostly 15 minutes of blog fame or, more deadly, finds its resting place in the ultimate academic journal.

While the economy of attention is getting tougher, architects are also face to face with a resilient, traditional communication problem. Maybe architects do need to get a crash course in story telling –like the one that Volume aspired to give us some issues ago– so as to get their prospective messages across, and, as such, it would also be Beyond’s dutiful obligation to cater for that peculiar need.

The future may be a prisoner of the present tense, but it is also its escape route. And while synthetic images may now provide the instant reward of an immediate glimpse into the yet unbuilt, we still have to be able to tell people about our plans for tomorrow.

[i] See Emergence vs. Emergency, a preview of a longer article to appear later this year at the Tickle Your Catastrophe conference proceedings publication, through Ghent University.

[ii] See here the amazing succession of projects released over a couple of days on which I have reflected in one of my weblog posts.

[iv] Beyond, Short Stories on the Post-Contemporary is published twice a year by SUN architecture, in Amsterdam. Its third issue, on Trends & Fads, is due May 2010.