Other Little Magazines #12 – On Photography

As the rain pours and the winter of our discontent sets in, it is time to go back to winter pleasures such as idly flipping through magazines at the sound of new pop stuff. (There it is: a reasonable soundtrack for this seasonal post).

As work kicked in and the rentrée came to a height, so too little new magazines piled around my messy desk table. And some were indeed so small that they could have drowned in the midst of everything else.

Scopio, for example, measures 12x16cm. This might be strange for a photography magazine but it turns out to be a cozy format, if not for the fact that you will look like a far-sighted old lady while trying to decipher its images. 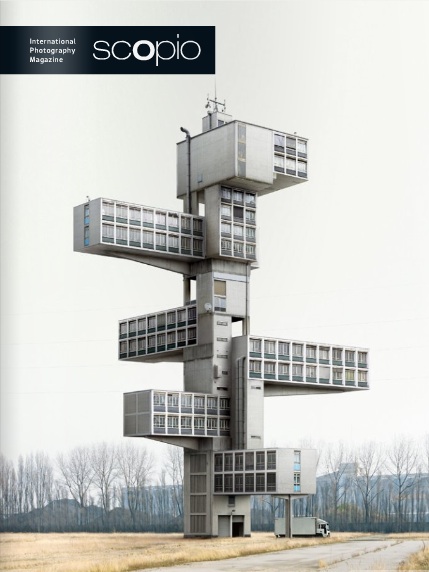 Just out in Porto, but proudly self-dubbed an international photography magazine, Scopio is indeed big when it comes to some of the names lined up for its contents: from Filip Dujardin and Helene Binet to Eszter Steierhoffer.

Its particular interest for me lies, however, in the fields it brings together: photography and architecture. Originating in a conference that took place at the Faculty of Architecture of Porto last Spring, it brings forward the recurrent approaches of its editor, Pedro Leão Neto, to the contemporary tools that involve urban representation and its images.

Thus, besides several visual and theoretical essays – that twice reach to specific notions related to curating architecture, but may also focus on local production – this first issue on Aboveground Architecture also provides in its Addendum the surprisingly good results of student seminars in which photography provided the instrument to analyze specific urban contexts. 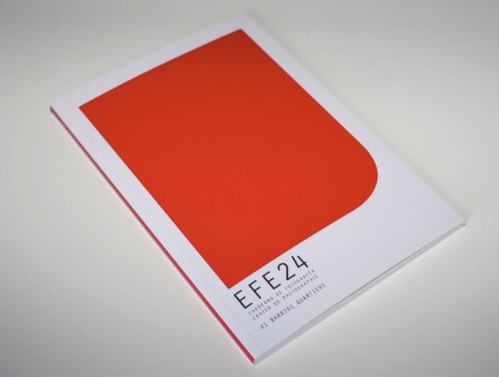 The second small publication I bring here today is EFE 24, a “Cuaderno de Fotografía” first published in Madrid in the long-gone Summer of 2009. Although a more standard alternative photography mag – if one may use the oxymoron – EFE 24 also dedicated its opening issue to pictures of urban settlements, and in this particular case the barrios, the quartiers.

In EFE 24, after a few introductory essays – on the everyday, the periphery, or on how Mr. Greeenberg would like his photography – one dives fully and exclusively into photography, one after the other, all filtered by the same layout, all by different authors. 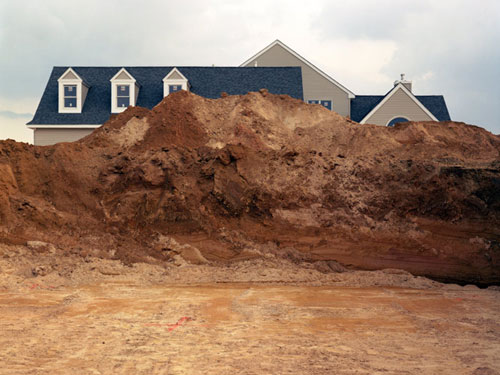 This is the moment when EFE 24’s project becomes clear and unique. From Xavier Ribas to Kevin Cooley, just to mention two arbitrary picks, the succession of 24 images by 24 photographers leaves us with no interpretation clues. Each image operates almost randomly, as only a sort of index that opens up to possible universes represented by the gaze of each different author.

Being a typical post-web magazine, EFE 24 weirdly reminded me of something that happened just today. Something that is revealing of how the internet nowadays not only offers a kaleidoscope of visual culture, but also represents a permanent lottery of how images may be seen and received. 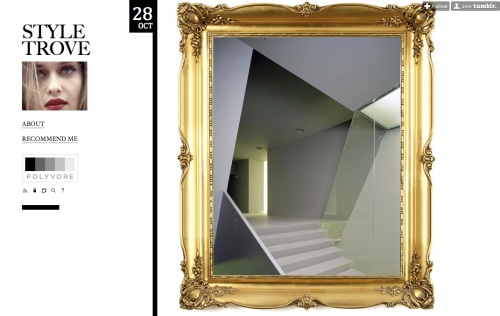 EFE 24 reminded me precisely of how an image by Daniel Malhão – that William Menking used in his Architect’s Newspaper review of my Interiores exhibition – suddenly jerked into an unpredictable tumbling across the web in which it immediately lost all referents and became one image in-between many others in new bizarre visual universes.

Posted in other little magazines

A tale of three cities

My first job at an architectural practice ever was in Barcelona, with Eduard Bru, back when the 1992 Olympics were starting to be tackled by the architects in the Catalonian city. This was the ecstatic Summer of ‘89. I convinced my parents to do holidays in Costa Brava and one day I escaped to look for work in Gaudi’s city.

I felt an eagerness to enter a wider, more exciting architectural scene. But I was also perhaps driven by an unconcious desire to discover how dance music was turning European cities nightlife upside down. By then, it seemed entirely reasonable to ocasionally drift from Otto Zutz’s three dance floors to Mies van der Rohe’s pristine pavilion by early morning light.

Although I came back over the years – so as to progressively observe BCN’s touristification (or urbanalisation…) to a degree that seemed to produce general irritation – only this year did the city again produced a distinctive effect on me.

When I came to Barcelona for my classes at Biarch last September, I arrived on the day of the general strike. As the cab driver soon informed me, there had been violent confrontations between the anarchists and the police. When I wandered through the streets by dinnertime, there was an atmosphere that resonated of party endings and drunken abandonment. 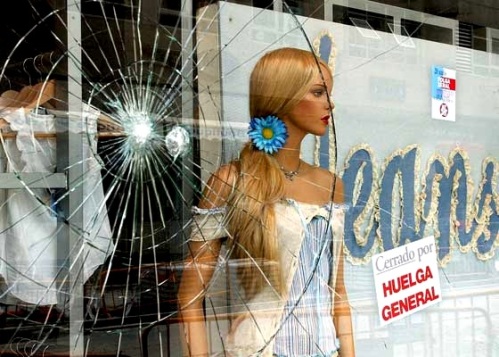 In Plaza Calalunya, the police surrounded a blazed, blackened car, as if it needed protection. The Ramblas were wet and fairly empty. Every garbage container in sight was overturned and some of them were still on fire. As I entered the Barrio Gotic, oblique piles of rubbish nearly obstructed the narrower streets.

A resident friend later confided how much he had enjoyed to feel again the darker, smellier side of a city that had been utterly domesticated and designed into being the most attractive of late 20th century Europe’s urban role models. 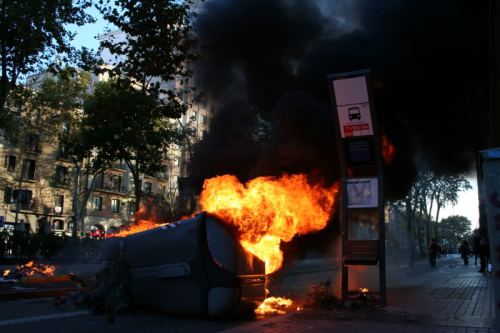 I couldn’t help thinking that if the strike lasted for three, five, ten days, the city would soon become unrecognizable. It reminded me of New Orleans going feral over the course of a few hours. It made me think of the delicate balance that makes our city machines tick. Extasi, extano.

Meanwhile, three weeks later, I arrive in S. Paulo. As, the airport bus melds into the early morning traffic, I count fifteen rows of vehicles flowing into the city centre. It is expected that by 2012 São Paulo will be arrested in a gigantic traffic jam. As portrayed in an old postcard, the growth of the Brazilian megalopolis by the late Seventies now seems idyllic and romantic. 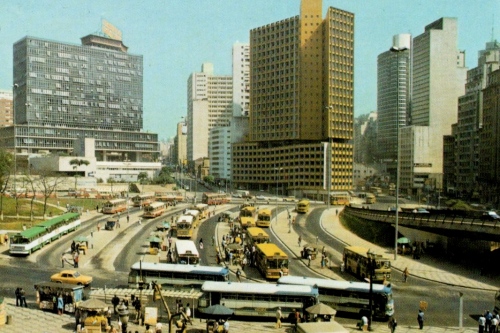 Halfway into the city, I suddenly hear a loud noise as if someone banged the coach. In a school bus by the other side of our vehicle, a bunch of children turn their heads to the window and press their faces against the glass. As I barely distinguish a black hooded head passing by, two fellow passengers briefly interrupt their babble and wifi browsing. “It’s a hold up…” one of them comments casually. He then turns again to his laptop.

Welcome to one of those extreme cities in which most of the planet’s population will live in one hundred years. S. Paulo is renowned for its amazing wealth distribution: a city of 18 million inhabitants in which, despite abundant poverty, there are nevertheless half a million millionaires. A glimpse of an urban future in which, as it’s being widely announced, the middle classes are a thing of the past. 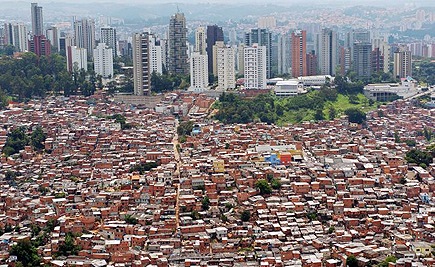 And why did I come back to São Paulo? Curiously to moderate a debate on another one of the emergent megalopolis of the exaggerated present, as many at the Once Upon a Place conference recently dubbed the nature of Philip K. Dick and other science fiction writers’ approach to reality.

Why is Luanda in our radars? While it is “only” the 15th fastest growing city in the world, the buzz must relate to the fact that in 2010 the capital of Angola became the most expensive city in the world, surpassing Tokyo and Moscow. Thus, there must be something going on. And there is. Oil, and diamonds, and again a shocking social and urban unequality.

If you are around this corner of the globe, do show up at the Centro Cultural de S. Paulo, tomorrow at 18h, when I will be stirring up the discussion on Luanda in the “Outlines for New Cultures” project.

Interestingly, this challenging event – put up by artist Graziela Kunsch and architect Paulo Miyada after Constant’s New Babylon –  is also the 4th issue of the Urbania magazine. Talking about the dissolution of print, here is a publication that really goes out to change its format with every new issue…

Posted in all things urban, conferencing