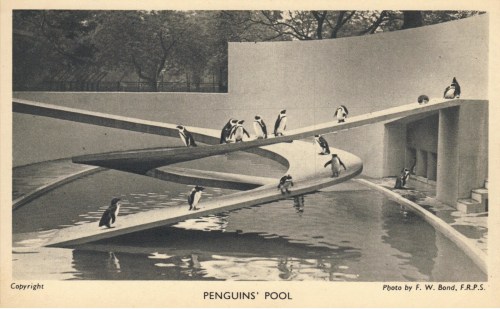 A final blow to the mythology of concrete as the ultimate, universal modern material took place in 2004, when the last remaining penguins in Berthold Lubetkins’ Penguin Pool at the London Zoo polemically left their celebrated shelter in search of a setting that would feel closer to their natural environment. After 70 years, Lubetkin’s architecture was still deemed organic, but not sufficiently so. Sympathetic to the penguin’s stand, a local zookeeper was reported to say that the pool was “an architect’s dream, not a penguin’s.”

As the Armory Show is coming to town, and as yesterday I was hearing Michael Loverich of Bittertang describing the birdcage they had just fabricated, I couldn’t help remembering that Candide #5 is finally coming out – with the personal plus that it carries four micro-fables I much enjoyed fabricating myself last year.

The cautionary penguin tale above was one of five that were actually left out of the forthcoming issue of the magazine led by Susanne Schindler and Axel Sowa, which is to be released next week through Actar. In print you will find another four very-short stories featuring a coakroach, some cad-monkeys, the inescapable Orwellian pigs and, most naturally, a Venturian duck.

The fables were initially proposed for LOG #22, after Michael Meredith invited me to participate in his guest-edited issue on the absurd. I thought the best way to reflect on the absurd was obviously to produce something absurd. Thus, the predominantly post-apocalyptic Fables of the Reconstruction (after REM).

Nonetheless, the editors obviously preferred politically-correct theoretical takes on Bruno Taut. This being said, it is understated that I will never understand the editorial logic of architecture magazines around this side of the globe, except if for their odorous lust for an imprecise academic celebrity.

Conversely and ultimately, and as I was confiding to both the former Michael and Cristina Goberna of FakeIndustries, I do think one of the more delightful and obscure crazes recently unfurling in the para-architectural world is precisely that of a bizarre, wide-range excitement for animal architecture. 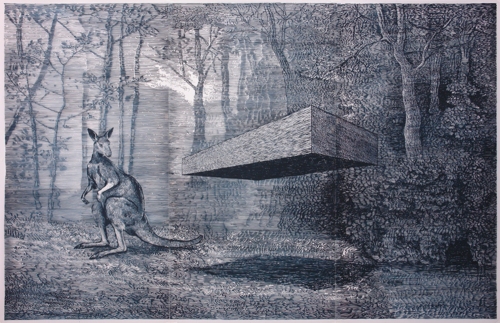 In this case, the absurd is definitely not in the eye of the beholder. It really is lurking out there. And it certainly has something to say on architecture as a discipline today. Remotely, it may even provide for its critique.

As Gogol had it in The Nose, back in 1836: “Where aren’t there incongruities? — But all the same, when you think about it, there really is something in all this. Whatever anyone says, such things happen in this world; rarely, but they do.”

Postscript: finally, how would I resist adding an image of Tom Ford’s doghouse?