Castles in the air

IF YOU usually surf the news of the day you have already captured the scent of the latest and truly urban trend. Be it in the first, the second, or the third world, eco-autarchic towers are being devised for the thousands, and sections of cities themselves are being developed as huge private condos for the hundreds of thousands.

There they are: efficient huge buildings and whole city slices growing one after the other, from the deserts of Dubai to the dense grids of Western and Eastern metropolises – as if suddenly stepping out of forgotten futuristic scenarios onto the dirty realism of a gritty, homogenised worldscape. Even amidst apparent financial arrest, pieces of a technological utopia are rising around us to enter the imagination of the everyday banal. What had been once restricted to specialised visionaries is now the subject of Guinness world records and a matter of gospel TV. Emphatic documentaries feed us with the amazing features and the heroic characters behind accomplishments in height, dimension and efficiency.

But as skyscrapers bloom and new instant cities flourish, one may sometimes wonder what will be the ultimate destiny of these again immensely fashionable mega-structures. Looking at recent proposals by the likes of MVRDV, OMA or Norman Foster, if you are prone to dystopian tendencies you can’t but start imagining these constructions like last resorts for the elected few – as the dejected many riot and turn suburbia and feral city centres into the announced urban slums of the near future.

In a fictional mix of Buñuel and Ballard, we could easily picture these enclosed, autonomous structures soon being cut off the surrounding debris. It’s almost as if, knowingly, technology has indeed been thoroughly orientated to create this specific building autonomy for the world to come. Architecture’s aesthetic autonomy may have been many times criticised as the perpetrator of a social divide. But this is really nothing, if compared to the message enclosed in the possibility of real physical autonomy.

What we read today as the optimistic promises of ecological efficiency may as well provide tomorrow the perverse solution for the ultimate social segregation between rich and poor. The harvesting of rainwater and humidity, the workings of superlative solar and kinetic energy recycling systems, the agricultural exploration of hanging gardens, the filtering of pollution through the building’s multiple skins – you name it: they are all wonderful tools leading us towards a brave new autonomy. Moreover, get these together with rooftop heliports and high-tech wi-fi communications systems and you will achieve that autistic sense of perfect social being that today is already possible in otherwise profoundly unbalanced cities like São Paulo.

If the disintegration of regional and federal nations indeed takes place, maybe it is not really city-states what we are again looking into. We may be envisaging new concentrated architectural typologies that adequately fit the coming social organisation. Whether as a surrealist update of the horizontal fortress firstly envisaged by Le Corbusier, or as a cynical vertical remix of Fritz Lang’s Metropolis work divisions, we can already extrude the physical forms of the post-contemporary from current conditions.

And until these architectural structures are also laid siege and taken over, we may be then looking at the brief return of the building-state itself. As such, it is only strangely appropriate to call skyscrapers the new castles in the air.

(Originally published as one of several micro-stories in “Taken to extremes,” my introduction to Beyond # 1)

It’s been a while, but good news are worth waiting for:

Beyond, the urban bookazine I’m editing for SUN Architecture in Amsterdam,   is soon hitting the streets and you can already enjoy an excerpt of the            “White Fungus” story by guest cyberpunk author Bruce Sterling. 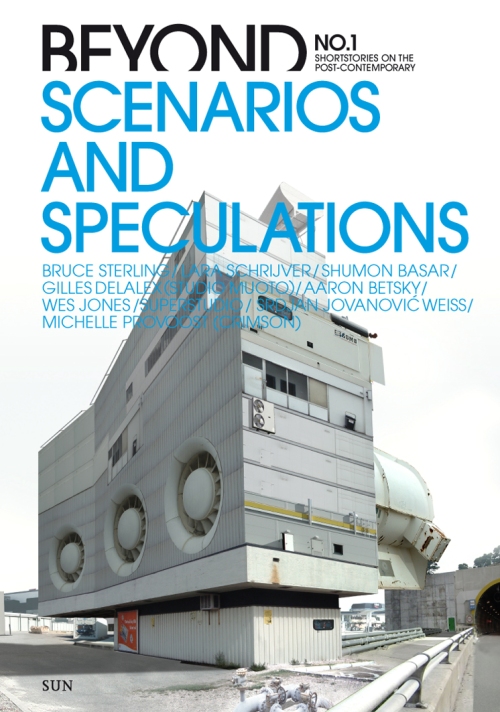 Beyond will be published twice a year, and will offer short fictions and essays from young upcoming architectural and urban writers.
The first issue, on “Scenarios and Speculations,” includes special features such as the “Re:doing Dubai” graphic novel, by Wes Jones, the reprint of Superstudio’s 1971 “Twelve  Ideal Cities,” and a postscript by Aaron Betsky, director of the latest Architecture Venice Biennale.