In Portugal, a poor country, if all built dwellings were fully occupied, we could house a population of 15 millions inhabitants. The resident population, including immigration, remains however at 10 million. Only 70% of the existing dwellings are occupied.

As this Portuguese source claims, this is the country in Europe in which new housing construction bears more weight (90.5% against an European average of 52.5%), but also the country in which, in between 1970 and 2001, 750.000 dwellings built before 1919 were abandoned as primary residences.

This means also that this is the European country with less investment in rehabilitation, either in financial or cultural terms.

Lisbon – which with its 560.000 inhabitants is also today a shrinking city – bears a staggering potential of 930.000 inhabitants if all its existing, planned and dwellings under construction were fully occupied.

No wonder the New York Times keeps on alerting the world to Portugal’s potential as an inexpensive golden retreat. (I would say hold your bets for a while, just to check if the country is not going feral-greek in a while…)

Strangely enough these don’t seem the statistics of a poor country. Instead, they remind me of the numbers Campos Venuti used to give us about Sicily, in his Urbanistica classes at the Milan Polytechnic. These are indeed the numbers of a blooming parallel economy – one that, according to McKinsey, ascends to 25%.

In this sense, the current political scandals in Portugal – a country in which there is no philanthropy but bankers have the nerve to suggest that younger generations should emigrate because this will only get worse – remind me of Italy in the early 90s, when the Mafia and the parallel economy were being targeted by some fierce judges: there was an immediate economical crisis. Falcone was killed, Berlusconi ascended to power and now Italy is what it is.

Was this article I kept sending to national newspapers such as Público, or i, or Diário Económico subtly silenced because of the weight of corruption and the parallel economy in Portuguese society? Or was the “oblivion” otherwise induced by the weight of the building sector in media economies?

I don’t buy it that newspapers that are thinning out by the month, and are happily sinking into the acclaimed “disappearance of print”, don’t have “space” for opinion articles other than those they pay at old skool rates…

Would it be the case that my argumentation was too feebly put or, on the contrary, rather too aggressive to established local political powers? Or was it that demanding to stop all ex-novo construction and allow to only rebuild in land already claimed by earlier construction a little bit too much for a corporate class like that of architects?

Whatever. (After all, we are indeed the strangely proud whatever, silent generation. Five years ago I wrote something on this…)

The fact is that the original unabridged text is finally coming out, just in time for Xmas, in a lavish architectural book that, even if it may look like something else, does ultimately address the necessity to make rebuilding city centers the very first priority for Portuguese architects. 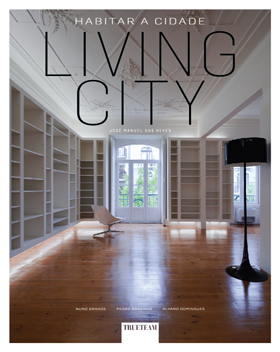 Again, and as I argued somewhat differently for other architectures of need, the outward show and tabletop appearance of Living City/Habitar a Cidade are, in this case, entirely justifiable…

After all, architects themselves have to be seduced rather than convinced to display an ethical position when it comes to engage or not with the irrational, shortsighted economy that surrounds and lures them.

This entry was posted in all things urban, critique and tagged books, Portugal. Bookmark the permalink.